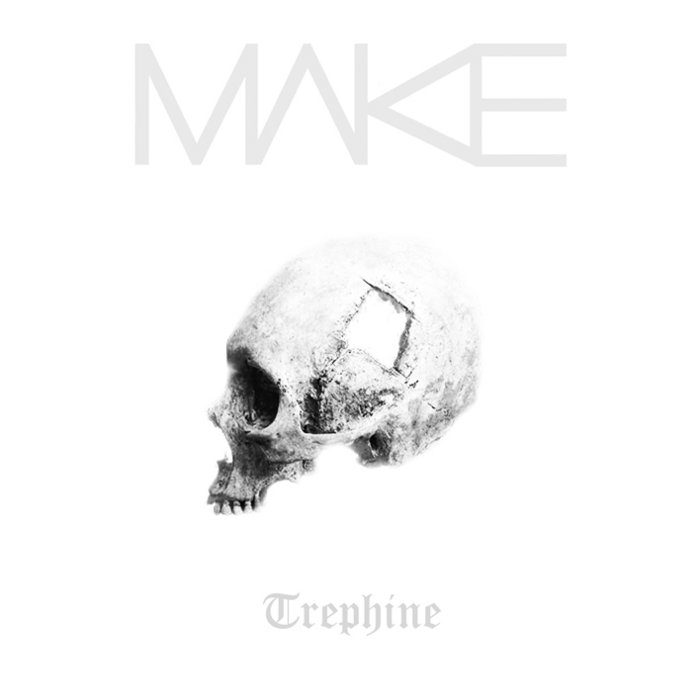 Aaron Lloyd Admittedly this is not what I was looking for when nosing through other people's collections but I'm glad I found it. MAKE are IMMENSE! Favorite track: Ancient Tongues.

jamroom A doomy post-metal psych rock experience, which makes this album an interesting change from the "norm". What is it with Chapel Hill and great bands? Favorite track: Returning to the Ruins of My Birthplace.

Michael Shiver I first heard one of their tracks on a college station while driving around near my hometown, and had to look up the playlist the minute I got home. The dark dreamscape they create is something truly special. Favorite track: Ancient Tongues.

Derek Pretti It's like a refreshing breeze off the coast of Neurosis. I may even prefer this album to the latest from the the grandfathers of drone. Favorite track: Ancient Tongues.

"Released on the band's own Black Iron Records, Trephine is a many-limbed hydra of an album, stretching in a number of different directions at once. It possesses an epic scale and ambition which places it close to the post-rock leaning territories of Grails and Minsk, even as its rawest elements delve towards doom’s bottomless pit, and was heralded in Toby Cook’s Columnus Metallicus as “a totally unexpected post-triumph”." - Kevin Mccaighy, The Quietus

"MAKE may not be a stoner band, but they sure as hell make music to get stoned to. The entire album is a slow-paced slide through atmospheric sounds of psychedelic doom and is consistently mesemerising, with sounds ranging from crushing doom to swirling, spacey sludge. Best enjoyed at midnight with a fat spliff and a stroll through a forest." - Hannah May Kilroy, Terrorizer

"While the most immediately noticeable aspects of ‘Trephine’ are the dense, sludgy, post-metal riffs it’s the more inchoate elements – fizzling noise influences, extended ambient passages and a clear appreciation for the cyclic meditations of Lungfish – that’ll keep you coming back. These nuances and the band’s knack for seismic sweeps and surges should be more than enough to pique your interest and we’d wager that even better things are still to come." - Alex Deller, Rock Sound

"A case study in living through futility and fighting against hopelessness, Trephine is an oppressive tale where time collapses and the sun decays. The trails these three make, though, are enough to fight against those feelings, to pull even the most embattled protagonist back into some kind of light. This is a perfect start for a welcome young band." - Grayson Currin, Independent Weekly

Bandcamp Daily  your guide to the world of Bandcamp

Interviews With Butcher Brown and Slauson Malone, plus LP of the week by SAULT.